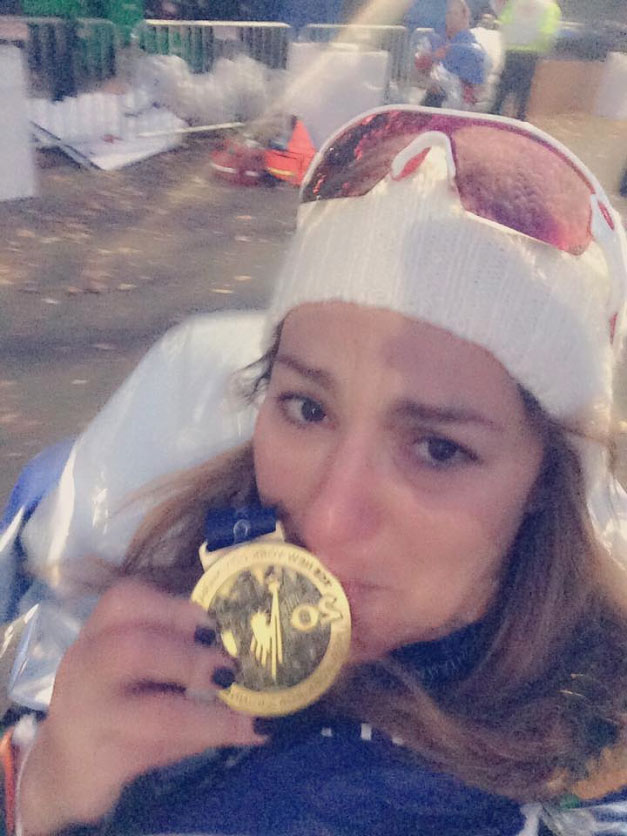 Alexandra Halaris, born in Athens, Greece, came to America in her early teens to chase her dreams. She started running in the summer of 2008 and ran her first marathon, the ING NYC Marathon, on November 3, 2013. She was absolutely ecstatic to run her second, the TCS NYC Marathon, on November 2, 2014. A few of her greatest accomplishments include her finishing her first marathon as well as her first Olympic distance triathlon. Her mother and future husband, Steve, inspire her every day to be the best person she can be.
Her goal for her second marathon is to challenge not only her limits, but also herself. Through trial and error, Alexandra is learning new personal strengths and weaknesses every day. She strives to train the way that she thinks is best for her mind and body, taking each new life experience into account. For this Marathon, Alexandra applied with Team in Training and did the 9+1 Program with New York Road Runners.  She is also running to raise money for Margo and the fight against pediatric cancer.
July 1st, Alexandra really jumped into preparation keeping in mind that many more exciting miles of running were to come! For this Marathon, she arranged to stay at a friend’s house in Staten Island the night before to avoid the New York City bustle. Excited, Alexandra purchased a new pair of running shoes, but last minute opted for ultimate comfort by wearing the shoes she ran her first Marathon in. She knew these were comfortable and didn’t want to partake in a trial and error run the day of.
The night before her first Marathon, she was very overwhelmed with nervousness! Did she sleep enough? Was she drinking enough water? Would she sleep through her alarm? All of these thoughts were racing through her head as she laid her head down to rest. The next morning she awoke feeling a mixture of excitement and anxiety. Upon arrival, a tear of happiness gathered in her eye as she noticed helicopters zooming in the sky with the sound of the ‘New York, New York’ song playing in the background. Everything around her was absolutely breathtaking.
And then she began. After her initial start, instead of turning her music on she decided to absorb all of her surroundings- every footstep, fan cheering and smell that filled the air. Upon crossing the Veranzano Bridge, children congratulated her with high-fives as she continued her unforgettable experience. After the 18th mile, a feeling of fatigue started to set in, but she remained positive and pushed herself until ultimately reaching the finish line!
Looking back, she smiles and remembers the spectators and volunteers who kept her hydrated, warm and cheerful, thanking them for every last bit of it all. She also thanks her dear friend (whom she nicknamed ‘ROADRUNNER’) Pascal Lauffer. He is not only her inspiration to run Marathons, but also her driving force to partake in Ironman. Alexandra truly believes in herself and pushes as far as her mind and body allows. In this new chapter of her life, she is ready to take on more and perfect her strengths and weaknesses. With the November Marathon quickly approaching, her excitement is endless as she moves forward with each goal in her life. She is truly an inspiration to all those who surround her.