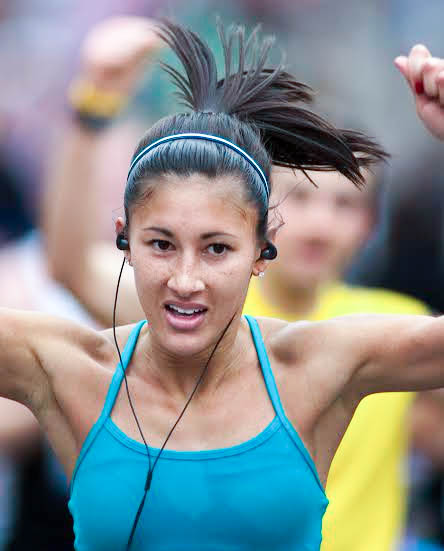 Laura Szu-Tu surprised herself by not only completing the 2009 NYC Marathon, but by running an astonishing 3:15. Three years later, she found herself facing injuries, pain and countless emotions while running in the 2012 San Francisco Marathon. This is the incredible story of how she rose to the occasion to accomplish her goals.

Laura grew up a very active child in Syracuse, New York. Although she participated in sports such as field hockey and lacrosse, she never focused purely on running until she moved to New York City in 2005. This simply started as a way to relieve stress, primarily running on the treadmill. Her most notable achievement was not only finishing her first marathon (the 2009 NYC Marathon), but doing it in a blistering 3:15.

Her most recent feat was the 2012 San Francisco Marathon. After hitting a low point in life, she needed something to focus on to keep mentally and physically active as well as give herself a sense of accomplishment. In February 2012, she conducted online research to find out the qualification details of the SF Marathon. It happened to be coming up that July and no previous qualifications were required; it was as simple as signing up and paying.

She began her preparation three months prior to the marathon, leaving herself little room to maneuver. Her workouts consisted of long weekend runs, shorter daily runs and core exercises. There was no strict diet, but a took on a larger consumption of carbs and healthy foods to compensate for the amount of calories being burned. Music was also a huge motivator in her training. The 3 months preparation meant ramping up her mileage quickly and unfortunately she paid the price 6 weeks prior to the race. Laura injured her IT Band and had to make the decision to stop training altogether and focus on healing. At this point, she was unsure she’d be able to run in the marathon at all.

After the injury, she began doing more strength exercises for the opposing knee muscles that hadn’t been worked on while running. She bought a medical wrap to help stabilize her IT band, which soon became her lifeline. With only a few weeks until the marathon, Laura was torn on whether or not she should even attempt it. As the day approached and after already putting in three months of training, she was not ready to give up. She decided to push though and run, but planned on stopping if the pain became unbearable at any point.

The morning of July 29, 2012, Laura woke up feeling nervous about how far she would get in the race and worried about trying to manage her pain. Approximately 25,000 runners gathered in San Francisco that day with one thing on their mind: making it to the finish line. Accompanied by a co-worker, Laura set out in the cold, foggy weather to face her goal. The pain started almost immediately. The course of the race included running across the Golden Gate Bridge and back. After seeing her co-worker cross the bridge in the return direction, she pointed to her knee indicating that there was no way she could run all 26.2 miles. From that point forward, her headspace was all about pain management.

Going downhill was most painful, but she knew that if she stopped to walk that was the end. However, after looking back on why she decided to pursue this and in allowing the marathon to consume her for over four months, she called for help upon a higher power- her recently deceased grandfather. She asked him to help manage the pain and promised that she would take care of the rest as well as finish the marathon for him. She finished the marathon that day, in 3:45 nonetheless.

After the San Francisco marathon, Laura started yoga as a way to heal, stretch and re-balance her body. She quickly became obsessed, making it the only form of exercise for her for a good year. Since then, she’s added Soul Cycle to her routine. The SF marathon was a very difficult and emotional experience for her. However, she feels that in the some distant future she will once again participate in marathon running.